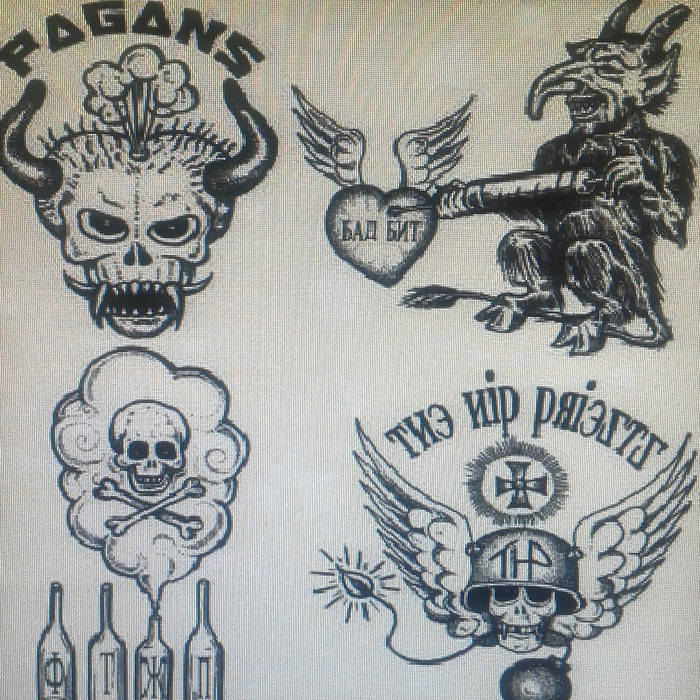 HAPPY BIRTHDAY TO THE PAGANS!!!! IT WAS 40 YEARS AGO 1977 THAT THE BAND FIRST PLAYED OUT UNDER THAT NAME, OPENING FOR THE NERVES AT THE LOOKING GLASS IN CLEVELAND. BROKE MY CHERRY, TURNED PRO... IT'S BEEN A WILD RIDE, AND I'VE HAD A BLAST. A COUPLE MONTHS AFTER THAT SHOW WE RELEASASED OUR FIRST SINGLE, "SIX AND CHANGE"......
The Pagans busted out of Cleveland in the summer of 1977 along with the Dead Boys, Pere Ubu and Devo in a punk rock explosion the world would come to revere.
Mike Hudson, the brains of the outfit, has continued the tradition off and on for nearly 40 years, with sporadic outbursts of new Pagans music, drunkenness and cruelty.
A few years ago, Hudson moved to Los Angeles, where he began a torrid romance with former model Evita Corby, dropped his first new studio a lbum in 15 years – Hollywood High – and wrote a novel, “Fame Whore.” He put together a revolving group of LA’s finest rock and roll gunslingers, headlined a festival in Spain and cut “Hopped Up” – said by Get Hip Records guru Gregg Kostelich to be the “strongest Pagans single ever.”
With lead guitars by Richie Duguay – who played on Guns ‘n Roses “The Spaghetti Incident” LP – and Capt. Ben Reagan from Richie Ramone’s band, “Hopped Up” constitutes a remarkable statement by a true punk rock survivor.
The Hip Priests
The inbred, oversexed, white trash bastard sons of Iggy P, Johnny T, Lemmy & Handsome Dick.
An awesome, glorious mess of Rampantly sexual, Souped up, Lubed up, Fucked up, Low Rent, Hot Assed Anthemic (s)Punk Rock 'n' Roll to make the little girls weep and big girls wet. A sweet 'n' sweaty sonic tonic to accompany your recreational drinkin, druggin and fuckin'.
Listen :
just4fun2.bandcamp.com/album/pagans-the-hip-priests