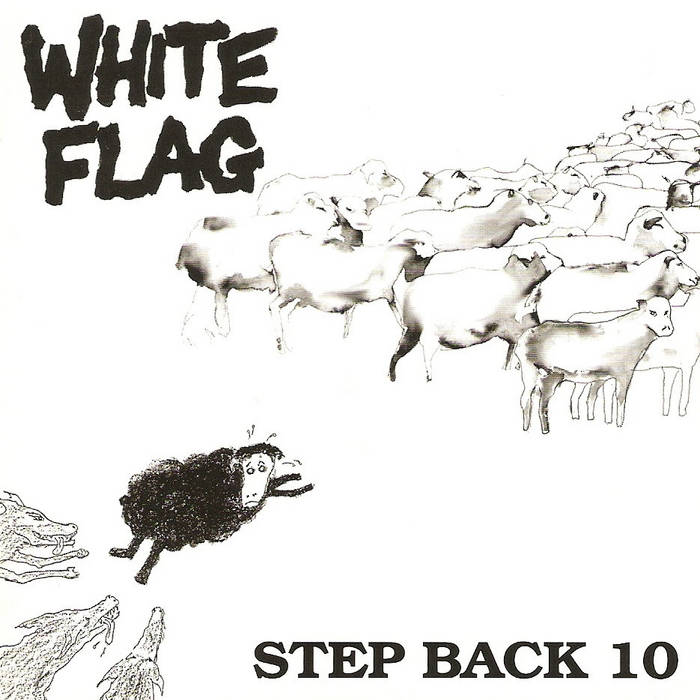 Collection of out of print albums. Released on CD in 1994.

In Loving Memory of Bill Bartell aka Pat Fear.

In Loving Memory of Bill Bartell aka Pat Fear.


WHITE FLAG was formed in a small town of Sunnymead, CA in 1982. The band was created as a reation to the complacency and status que that had settled into the original Los Angeles punk rock scene. In 1982 the original "No Rule"ethic had become a hardcore clearly regimented set of can and can not`s, and the members of WHITE FLAG simply were not going to let that happen uncontested. Originally a five piece, fronted by the legendary " Al Bum", "the most obnoxius and untalent person w know" according to Doug Graves. the former frontman`s main \par attributes was his disturbingly similar apperance to one Ozzy Osbourne, then the antithisis of what "punk" stod for. Clad in tredemark fringed " Ozzy" outfits, with waist lenght hair and crosses galore. The band proceeded to con- found both rock and punk audiences with complete genre crossover confusion. The result was as Pat Fear puts it, \par "the real process of weeding out". Several albums later the band developed a large following, including members of other groups in the L.A. area. \par Members of Bangles,Social Distortion,Bad Religion,Redd Kross,Germs and Adolecents to name a few, made guest appearances on their 1984 LP "Third Strike",which sold more than 30 000 copies. The cover of which \par poked fun at the growing political lines being drawn between the left and right wing factions of the punk scene.As the bassist Jello B. Afro puts it, "We were in the middle", laughing at how pathic and hypocritical both sides were. As a good example, those on the left actually believed we were facist, racist and "Im an African American" ! The subsequent tour and\~ 3 sides LP " Feeding Frenzy" proved to be Al Bum`s last stand with the band. The group went on to recprd their most popular LP "Wild Kingdom" with original drummer Pick Z. Stix on guitar and vocals. The song " Face Down" from this LP has proved to be one of the bands popular song. Covered by many groups, including the swedish band SATOR. As the year passed, numerous friends and fans have drifted in and out of the band, including members of the Muffs and Redd Kross. Pat has been writing with former GO GO`S, Charlotte Caffey, as well as Ken Stringfellow of the Posies. Pat also played on the Melvins "Houdini" LP. The band returned to Sweden in august 1994 for their first European shows since the succesful 1986 tour. A \par split CD with swedish band Sator was out due the same time in 1994. Indiependent Swedish label JUST 4 FUN released the CD entitled "Step Back 10", compiling the bands enigmatic first LP "S IS FOR SPACE" and the "Third Strike" along with studio tracks from "Feeding Frency" LP. Spain`s indie king Munster Records released a "Best Of" LP/CD, entitled "Thru The Thrash Darkly". Showcasing the band numerous styles and members and including several unreleased tracks. The band did a bigger tour in Spain in september 1997. When not concentrating of WHITE FLAG bassist Doug Graves is a coach for the U.S. speed skating team, \par Pat Fear runs the bands label Gasatanka Records.The label released numerous LP`s and 7" `s, including artist such as Shonen Knife,Redd Kross,Sonich Youth,L7,Hole and the notorious punk super group Tater Totz, among the roster.The first LP by LA`s original punks the Zeros and second Lp by Japan`s 5.6.7.8`s. Ken from The Posies is now a full time member of the band. The new Lp is co-produced by Chips Kiesbye from Sator. Pat are also a full time member of the great country/pop/punk/rock band CHARIOT.