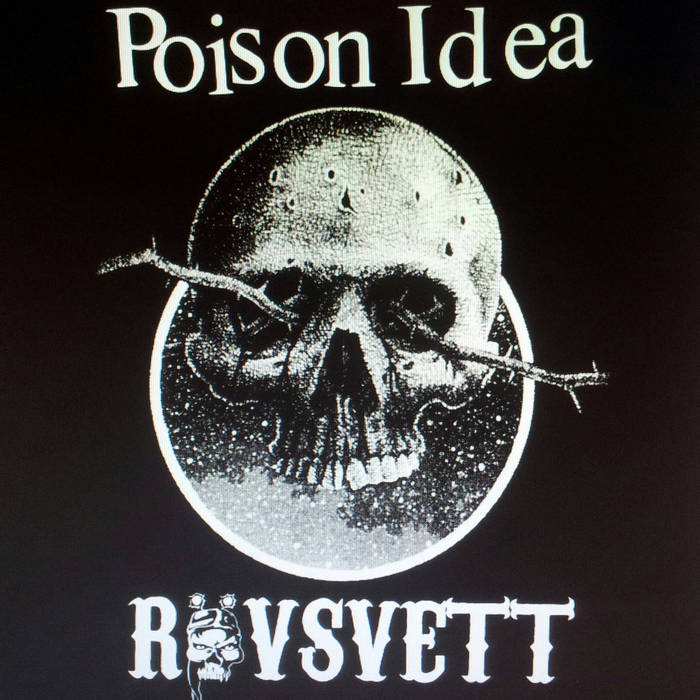 I have, what always seemed to me, an irrational hatred for pop-punk. Then someone clued me into the fact that technically the Misfits fall under that category; an idea that I hate. I’ve realized that this disdain for melodic, dildos hopping around gleefully on stage stems from the fact that bands like Poison Idea exist. Poison Idea is here to fuck you up; pure and simple. They’re not interested in polishing up their act; for that you can go to Turbonegro whose seminal album “Apocalypse Dudes” is the Star Wars to P.I.’s Seven Samurai: “Feel The Darkness”. That is not a diss on Turbonegro in anyway, they know good shit and they took a swing at it. Poison Idea are the guys who are here because not being in a gnarly punk band is not an option for them, they’ve tried, and failed to walk away. “Something Better”, off this new split with Rovsvett is a lumbering beast with cold steely eyes; it jerks back and forth, swaying while eyeing its prey. It’s a drunken wildebeest that’s about to show the young cubs that it’s still the king of the pack. A lot of bands these days mistake snotty antics for attitude, but attitude is carved from granite, through trials and failures. Attitude puffs it’s chest and balls a fist in defiance of shitty little pip squeaks who Y.O.L.O. and have “swag”. P.I. follows up the original with a cover of the 13th Floor Elevators, “You’re Gonna Miss Me”; it’s a good cover, but coming off the new track, I could have used some more new P.I. in my life. Rovsvett come off as pretty good foil to Poison Idea on this split. I feel like they switch back and forth into English from whatever their native tongue is…or maybe it’s just me. Rosvett remind me of bands like Los Crudos; angry, fast and bi-lingual. “Die on your knees” is a bit of a misstep given the raw power of their first track, but they bring it back to a furious ode to what sounds like a serious hatred for Michael Bay and his shitty disaster porn movies (side note: that song may not be about that, but I have no couth and it sounds like their shouting something about Michael Bay). Slip this on your mat, lower the needle, close your eyes and for, like, 10 minutes: late 80’s early 90’s hardcore punk is on top of the dog pile in the pit.